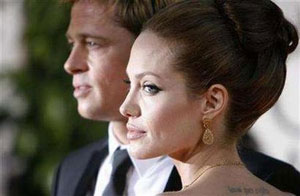 Angelina Jolie wants more children, more quality time with partner Brad Pitt, and no, they're not fighting, getting married or worrying about the gossip.

In an interview with Reader's Digest released on Thursday, Jolie, 31, dismissed persistent reports in celebrity magazines that her relationship with Pitt was on the rocks because of their growing family and work commitments.

Asked whether they fight, Jolie said; Not really. We'll get into issues about global events.

Our first question is, what paper is it in? The New York Times? If not, do we really need to worry? she said of the unrelenting gossip.

In March, the Oscar-winning actress adopted her third child, Pax, 3, from Vietnam, bringing her brood to four. She acknowledged she and Pitt had a problem finding quality time in the first weeks after the arrival of Pax, who joined Cambodian refugee Maddox, 5, Ethiopian refugee Zahara, 2, and Shiloh, Jolie's daughter with Pitt, who was born in May 2006.

We hang out. We try to talk over the swing set... (Pax) still gets scared if I'm gone more than a few hours. But we'll get them organized with a movie and popcorn and try to run off and lock the door for a bit, she said.

Jolie said she adopted Pax so that Maddox would have a brother who looked like him. It became clear to us that it might be important to have somebody around who is similar to the other children so they have a connection.

She said she and Pitt had no plans to wed. We've both been married before. Our focus when we got together was family, and we are legally bound to our children. That really seems to be the most important thing, she said.