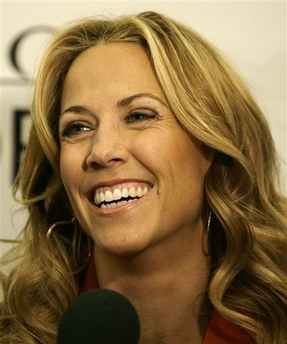 Singer-songwriter Sheryl Crow laughs during an appearance in the Empire State Building in New York, in this file photo from Jan. 29, 2007.

I am so excited to share with you guys that I've adopted a little boy. He was born two weeks ago, Crow announced on her Web site Friday.

She told fans the boy's name is Wyatt (after my dad) Steven (after my little brother and Scooter) and we are enjoying some very private family time.

This is the first child for Crow, 45, who underwent breast cancer surgery in February 2006.

That same month, she and cycling champion Lance Armstrong announced that they had broken up their engagement. It would have been her first marriage and the second for Armstrong. The pair met in October 2003 and began dating shortly after.

A nine-time Grammy winner, Crow is best known for the hits Soak Up the Sun and All I Want to Do.

上一篇：Fan ordered to stay away from Bullock 下一篇：Jolie: more kids, no wedding