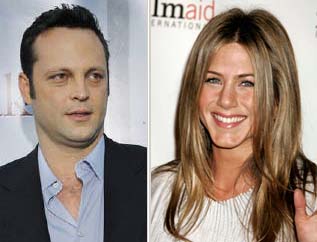 The former Friends star and the Wedding Crashers actor have chosen Chicago, as it was the place where they got intimate for the first time during the filming of Break Up.

According to a Life Style Weekly report, Aniston will be in Chicago to record a show with her friend Oprah, and Vince will be in the city to visit his family.

A source revealed that both have been in touch even after their real life break-up.

They talk for hours every week. Vince still knows how to make Jen laugh and she loves all the little hints he keeps dropping about how they should be together, a source was quoted as saying.

The source also claimed that the delay in their official reunion is because Jennifer is eager to start a family, but Vince is yet to get over his diffidence about having kids.

Jen knows Vince could be a great father if he would get over his insecurities about having kids. She's still hoping they can see eye to eye on the issue, the source said.