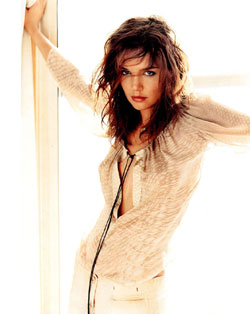 The Batman Begins star is upset by reports the 18-year-old Texan is now going by an almost identical moniker.

A spokesperson for the original Katie Holmes says, It's a really cheap shot. Obviously, Tom would support Katie in anything she decides to do about it.

But Shy Love, a representative for fashion student Katee and an adult-video veteran, tells PageSix.com the name alteration was done in homage to the 28-year-old wife of Tom Cruise.

She says, Katee is using the name as a tribute to Katie, who has always portrayed an innocence in everything she's done, beginning with Dawson's Creek.