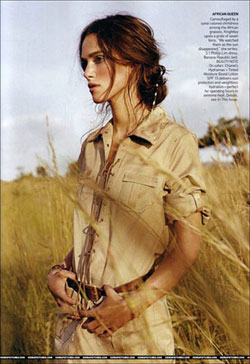 British actress Keira Knightley, star of the Pirates of the Caribbean film trilogy, won 3,000 pounds ($5,965) in libel damages on Thursday over a newspaper slur that she was excessively thin.

The Daily Mail had run a story with a picture of her in a bikini, headlined: If Pictures Like This One of Keira Carried a Health Warning, My Darling Daughter Might Have Lived.

The article could be interpreted to have asserted that the claimant bore personal responsibility for causing the tragic death of Sophie Mazurek, a 19-year-old, who battled with anorexia, Knightley's lawyer Simon Smith told the High Court.

The 22-year-old actress had been embarrassed by the entirely false and deeply offensive suggestions.

He added the story could be taken to mean that the actress had set out to lose an excessive amount of weight by failing to eat properly and by over-exercising inappropriately because she wanted to become unnaturally thin.

Three days earlier the paper had published an article under the headline It's Itsy Bitsy Teeny Weeny Keira Knightley in which it referred to her denial that she suffered from anorexia.

Smith told the judge, Justice David Eady, that Knightley accepted that she had undergone weight training for roles in action films and that this had involved muscle toning which did alter physical appearance.

However, he said her weight had never fluctuated more than a few pounds through her adult life, and remained at an acceptable level which took into account age, gender and height.

The claimant is not a fitness fanatic, as she considers it more important and has spoken of her opinion of the need to be healthy and happy, he said.

The claimant found the suggestions all the more offensive as she has freely admitted publicly in the past that a member of her family suffered from anorexia and she is well aware of the devastating effects eating disorders can have.

Kate Wilson, lawyer for the paper's publishers Associated Newspapers, said they apologized for the distress and embarrassment caused by the article and accepted that the actress bore no responsibility for Mazurek's death.

Knightley's mother, Sharman Macdonald, who was in court, said afterwards that her daughter was adding another 3,000 pounds to the award and donating the money to a charity called BEAT which helps people with eating and mental disorders.