Lace, a shinbone among Depp's ideas for pirate fashion

You might think that Johnny Depp's pirate character in the Pirates of the Caribbean movies would have had other things to worry about, but, apparently, a lot of thought went into his wardrobe. 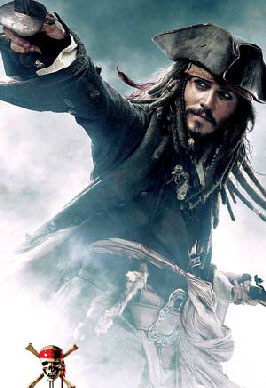 Disney is releasing the first two Pirates films, The Curse of the Black Pearl and Dead Man's Chest on Blu-ray discs this week. Among the extra features are fashion commentary. Some tidbits from costume designer Penny Rose and props master Kris Peck:

The lace tied around Sparrow's wrist was a suggestion from Depp, who wanted a few points of interest.

This is an old piece of lace and in a conversation with Johnny, we decided that it was a trophy piece from a young lady, said Rose.

The bone in his hair is a shinbone from a reindeer.

The green ring one of four Sparrow wears in the movies is one that Depp bought for himself in 1989.