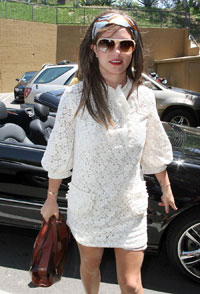 Britney Spears says she hit rock bottom, in a message posted on her Web site about the end of her marriage and her time in rehab.

Recently, I was sent to a very humbling place called rehab. I truly hit rock bottom. Till this day I don't think that it was alcohol or depression, the 25-year-old pop star writes. I was like a bad kid running around with ADD (attention deficit disorder).

Spears completed a monthlong stay at a luxury Malibu rehabilitation treatment facility in March after a series of run-ins with the paparazzi that included a stop at a San Fernando Valley hair salon, where she was caught on video shearing her own locks. Other photos splashed across the Internet appeared to reveal Spears out partying wearing nothing underneath her short skirts. She was seen going out with Paris Hilton and Lindsay Lohan after filing for divorce from aspiring rapper Kevin Federline last November, just two months after giving birth to their second child, Jayden James. The pair also have an older son, Sean Preston, now 20 months.

I had a manager from a long time ago come in and try to direct me and my life after I got my divorce, writes Spears. I was so overwhelmed I think that I was in a little shock too. I didn't know who to go to.

I realized how much energy and love I had put into my past relationship when it was gone because I genuinely did not know what to do with myself, and it made me so sad. I confess, I was so lost, she writes.

Spears also says she is having to face a lot of things as she raises her two young sons. A lot of insecurities from when I was little are coming up again, she writes. It is like we are never good enough.

Explaining her recent behavior, she says: I think it is actually normal for a young girl to go out after a huge divorce.

I am going to make mistakes everyday, and I am sure every mistake I make will probably be on CNN or `Good Morning America,' she says. I am only human people and I love you for still loving me.

She closes by saying: We will never really understand or figure out life completely. That's God's job. I can't wait to meet him ... or her. Love, Britney.