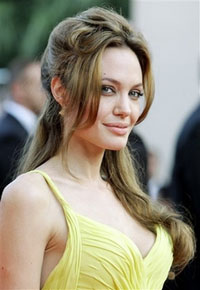 Angelina Jolie arrives for the screening of the film 'Ocean's Thirteen,' at the 60th International film festival in Cannes, southern France, on Thursday, May 24, 2007. [AP]

Angelina Jolie, Honorary Board Chair of Global Action for Children (GAC), applauded President Bush's increase for Orphans and Vulnerable Children (OVC) funding, but cautioned that there is more work to be done. The President called on Congress today to provide $30 billion in funding for the President's Emergency Plan for AIDS Relief, including care for OVC, over a five year period after the President leaves office. This doubles the current funding of $15 billion over five years which expires in 2008.

With regard to the increase for Orphans and Vulnerable Children, Ms. Jolie said, We are all very grateful that the President has made this major commitment to these children. These are the world's children and this is the world's responsibility, and we hope that other G-8 countries will follow his lead. I will continue to actively lobby on behalf of these children and encourage Congress to follow through on this commitment.

Ms. Jolie came to Washington late last month for meetings with GAC Executive Director Jennifer Delaney and senior officials at the U.S. Department of State, to call on officials to increase funding to support OVC programs and access to education. GAC is a nonpartisan advocacy coalition focused on increasing funding for programs that support Orphans and Vulnerable Children and provide free primary school education in developing countries.

Delaney, added, The US has made a noble effort in increasing funding for OVC programs, and we'd like to see the other G8 nations do the same. We hope that the US funding will be used to carry out the mandate of the Orphans in Developing Countries Act, PL-109-95 signed into law by President Bush in 2005. The Act calls for the establishment an office of a full time high-level Special OVC Advisor tasked with coordinating government agencies, so that funding is spent in the most efficient way possible to reach as many children as possible.

GAC was formed in 2003 as a campaign organized by faith-based, nongovernmental and student organizations dedicated to OVC and the communities that care for them. GAC's unique strength lies in the diversity of its partners and allies and its ability to mobilize a broad range of constituencies to advocate for children.