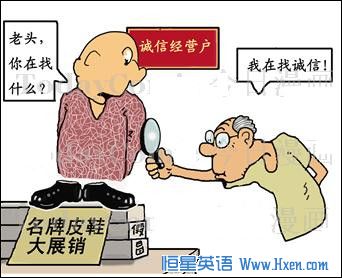 There has been a heated discussion about this kind of pictures in the newspaper.

Simple as the picture is, it does demonstrate certain thought-provoking social phenomenon.

The picture tells us that the credibility remains to be an integral part in our society, especially in the commercial world.

Nowadays, individuals, enterprises and organizations do attach due attention to this issue.

By gaining credibility, people and organization can make money, take profits and even obtain wealth. With credibility and sincerity, not only can they accumulate wealth, but will also establish their careers, fit into society and finally attain social status. Honesty can promote communication between people, rid of barriers between people and bridge gaps between people. what’s more, were there no credibility in our society, never could we survive the fierce competition in the age of globalization.

As a consequence, honesty is not something that we can afford to lose or leave it at large. It is imperative that corresponding regulations and mechanisms with the joint efforts of the media should be introduced and enforced to promote honesty. The awareness of honesty should be enhanced, which will lead us to make every effort to keep our promise and boycott fakes which are shown in the picture. Only in a reasonable, prosperous and healthy atmosphere can we hope to avoid the scene in the cartoon and witness the ideal scene in which people can enjoy their life to the uttermost.

Honesty is paramount not only in the commercial world but in other domains. In the academic world, for instance, the plagiarizing of others research results can have damaging effect, which makes it easier to dismiss all scientific pronouncements. when we learn that the distinguished professor assuring us of the safety of a particular product holds a consultancy with the company making it, we cannot be blamed for wondering whether his fee might conceivably cloud his professional judgment.