Los Angeles - He wasn't the husband. He wasn't the baby daddy. But as long as there are court documents to be filed, Howard K. Stern is still in the picture. 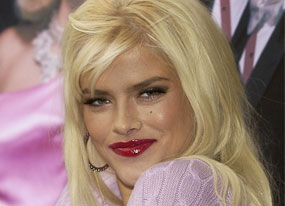 Stern has put in a request to be the special administrator of Anna Nicole Smith's estate, according to a will and probate petition filed Monday on Stern's behalf in Los Angeles Superior Court and obtained by E! News. The 14-page filing values Smith's Studio City, California, home at $1.8 million and lists her personal property in the amount of $10,000.

However, the former Playboy Playmate still owed $1.1 million in mortgage on the property, per the petition, reducing her total assets to $710,000. (View the documents in PDF format.)

Missing was the reality-TV star's estranged mother, Virgie Arthur, who is currently fighting Birkhead for at least partial custody or visitation rights with Dannielynn. The opposing parties are due back in court in the Bahamas June 8 for a final custody hearing.

Arthur also battled Stern for custody over Smith's remains, wanting her to be buried in Houston, despite Stern's insistence that his longtime client turned companion would have wanted to be laid to rest in the Bahamas, next to her son Daniel. The prerogative was eventually turned over to Dannielynn's guardian ad litem, who helped secure a Bahamian burial.

Smith died Feb. 8 of an accidental overdose of prescription medication.

Stern's attorney, Vivian Thoreen, requested that her client, who's currently still in the Bahamas and has waived any right to compensation for acting as executor, be appointed special administrator to immediately marshal and preserve the assets of the estate. She stated that there's currently no one else available to step up, a job that will include, among other things, dealing with any pending litigation that could affect Smith's assets.

A probate hearing has been scheduled for June 19.

When she died, Smith had been sparring with the family of her late octogenarian oil-tycoon husband, J. Howard Marshall IIwho died in August 1995, just a little more than a year after they tied the knotfor more than a decade over what she viewed as her rightful inheritance, which at one time totaled as much as $474 million.

The case is currently standing by in the 9th Circuit Court of Appeals in San Francisco. If Smith's estate succeeds in securing even a morsel of that inheritance, Dannielynnas Smith's only heirstands to inherit millions.