Singer Britney Spears donned a cheeky sailor hat, took to the high seas and went cruising - all in her lunch break!

The pop princess found her sea legs and rented a private yacht for an hour's break from her daily dance rehearsals.

With sons Sean Preston and Jayden James in tow, Britney, dressed in a pink sundress, boarded the yacht in California's Marina Del Rey and soon stripped off to reveal a sexy pink and green polka dot bikini.

The recently divorced star, who was reported to have handed $1million in a divorce settlement to ex-husband Kevin Federline, seemed relaxed as she enjoyed the one hour cruise, drinking cocktails and sunbathing as the yacht cruised in Marina Del Rey, California. 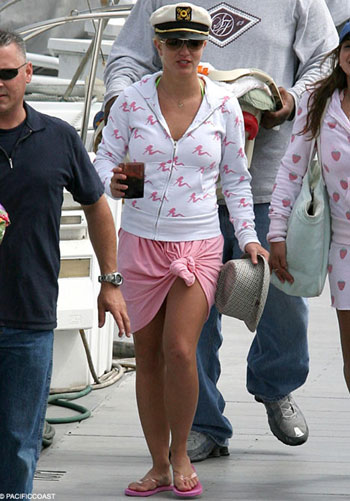 Twenty-five year old Britney has had a troubled few months, including a stint in rehab, following the bizarre spectacle of her being filmed shaving off her hair.

Her performances have received mixed reviews, but demand is high with fans often paying $500 per ticket, despite Britney's reported lipsynching performances lasting for less than 15 minutes.

Advice has been thrown at the Toxic star from all quarters, but American Idol judge Simon Cowell offered: Only Britney can save her career. 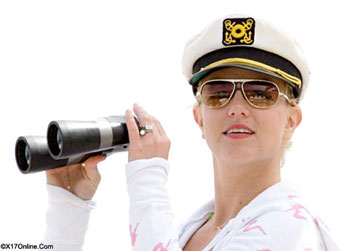