Spears is subject of unflattering photos 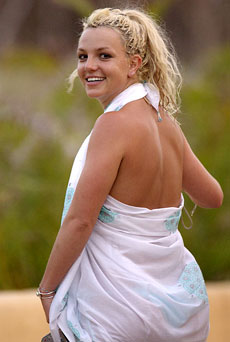 Britney Spears turned on a smile for the cameras [Daily Mail]

MEXICO CITY - Britney Spears is showing up yet again in unflattering photos splashed across newspapers and Internet Web sites.

Mexican TV and print media published pictures that celebrity Web site TMZ said showed the 25-year-old pop star vacationing in Puerto Vallarta. Spears, her long, blond hair extensions pulled back in a ponytail, is wearing a white-and-turquoise cover-up over a bikini that reveals her not-so-toned backside.

Spears completed a monthlong stay at a luxury Malibu, Calif., rehabilitation treatment facility in March after a series of run-ins with the paparazzi that included a stop at a San Fernando Valley hair salon, where she sheared her own locks. 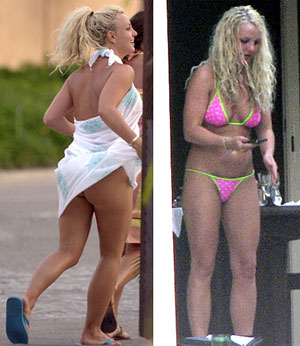 Britney Spears never did worry about being over exposed [Daily Mail]

Other photos on the Internet have appeared to reveal Spears out partying while wearing nothing underneath her short skirts. Other photos have shown her battling weight gain.

Spears recently posted a message on her Web site saying she had been acting like a bad kid running around with ADD (attention deficit disorder).

Recently, I was sent to a very humbling place called rehab. I truly hit rock bottom. Till this day I don't think that it was alcohol or depression, she wrote.