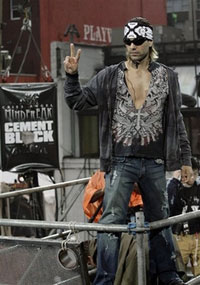 In this file photo originally made available by the AE Network, magician Criss Angel gestures before entering a glass box which will be encased in 3 tons of concrete and suspended 40 feet above the ground near Times Square, Monday, June 4, 2007.[AP]

NEW YORK - Criss Angel, who can be seen performing stunts on AE's Criss Angel: Mindfreak, is being mysterious about whether his relationship with Cameron Diaz is real -- or an illusion.

Cameron Diaz is, in my opinion, one of the most beautiful actresses-- A-list actresses-- in Hollywood, he told AP Radio News. She's talented, smart. Look at me -- do you really think she would have any interest in a guy like me?

Angel dedicated his latest stunt to Diaz this week. The illusionist appeared to escape Tuesday from a box encased in concrete and suspended 40 feet above the ground near Manhattan's Time Square before it came crashing to the ground.

The stunt was to promote the third season of Mindfreak, which debuted Tuesday night.

I love you baby. Have a safe trip to Europe for your `Shrek' tour, he said in his shout-out to the 34-year-old actress, who reprises her voice role as Fiona in the DreamWorks animated blockbuster Shrek the Third.

So, are they or aren't they dating?

We're good friends, and I'm honored to call her a friend because genuinely she's a wonderful human being, and she's just a great person, we have a good time, he told AP Radio News.

上一篇：娱乐新闻：Paris Hilton not eating or sleeping: report 下一篇：Sienna Miller is the new spokesperson for Tod's