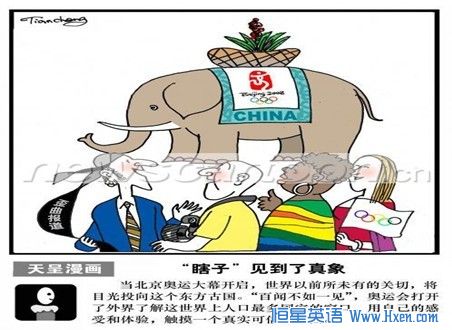 Introduced as a widely known Chinese fable “Blind men and an Elephant”, it tells us never to draw a conclusion from incomplete data. For tremendous years, people outside China could only get narrow and unilateral knowledge about China, leaving a real China far from being unveiled. Nevertheless, the past 2008 Beijing Olympics was the very and perfect time to lift the curse.

For most people who are non-Chinese, they tend to have a picture of Chinese who are just Confucius-like, living in a highly polluted place or even having no freedom to speak in public, etc. Reasons behind are usually the following two: one is that westerners are not so eager to learn about China just as our Chinese do about them, the limited information that reached them are mostly outdated or biased one which were more often than not stipulated by a third party with a special interest; the other is that Chinese government were not so open as the one today and did inadequate publicity about its country, thus the image of China is always kind of mysterious to outsiders, then the image depicted above about China, though misleading, is understandable.

However, the grand Olympic Games provide an golden opportunity for people around the world to see a complete and “brand-new” China. Therefore, a better world characterized by harmony between China and all the other countries is to come.