The following chart shows the different attitudes of men and women towards down-to-earth marriage. Look at the chart carefully and write your response in about 200 words, in which you should interpret the chart, state the reasons and give your comments. 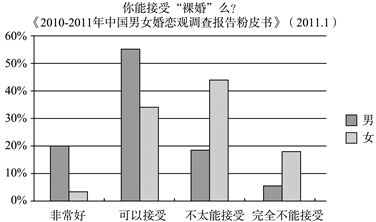 The Acceptance of Down-to-earth Marriage

The chart above clearly demonstrates the different attitudes towards down-to-earth marriage between men and women.

We can see clearly from the chart that the percentage of male respondents supporting the idea of down-to-earth marriage is much higher than that of female ones. There is no doubt that this reflects the difference between man and woman. For one thing, it lies in their different demands for marriage. The majority of women focus on the sense of security. After all, marriage is not equal to love, and the basic material foundation is necessary, especially after married. Meanwhile, they take material foundation as the reflection of mans responsibility. For another, to some extent, it is the consequence of the actual social reality, such as the high living standard, high wedding cost and more free and independent minds. Taking into account what has been discussed above, we can arrive at the conclusion that the findings that men and women have distinct attitudes towards down-to-earth marriage are consistent with the differences between the two genders as well as with the development of society.

I believe that the percentage of people supporting the so-called down-to-earth marriage will change constantly as time goes on.